(AP) – The U.S. District Court in Wyoming ruled Monday that the state’s ag-gag laws are unconstitutional. 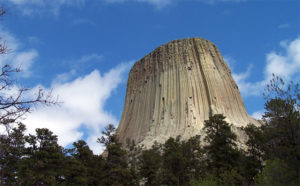 The ruling comes after several years of litigation between the state and plaintiffs who argued the laws were written solely to deter monitoring of the effects of agriculture on the state’s water, land, and air.

Wyoming’s ag-gag laws, passed in 2015, imposed criminal and civil penalties on anyone who crossed private lands in the process of collecting data, such as photographs or water samples, to give to federal or state regulators.

The result, opponents say, was a chilling effect on monitoring of public water, air, and land quality by journalists, citizen scientists, and environmentalists.

David Muraskin, an attorney with Public Justice, which represented two of the plaintiffs, says there was no justifiable reason why the state should pass trespass laws that only apply to the collection of environmental data.

“Lots and lots of people trespass in Wyoming: recreationalists, people going to camp,” he says. “But for some reason the state chose to go after people collecting data about the environment.”

Muraskin says he hopes the verdict “sends a message” to other states that ag-gag laws won’t stand up to strict scrutiny under the First Amendment.

Ag-gag laws have been passed in several states, including Iowa, Idaho, Utah, North Carolina, and Arkansas. The laws were initially written in response to undercover investigations by animal-rights activists into large-scale industrial livestock farms.

In recent years, the laws have broadened to restrict other types of monitoring of agribusiness, from journalism to concerned neighbors. Several ag-gag laws have been overturned, including Idaho’s in 2015 and Utah’s in 2017.

A challenge to Iowa’s ag-gag law is moving through the courts.

In 2017, the 10th Circuit Court of Appeals ruled that Wyoming’s ag-gag laws should be examined under the First Amendment because data collection counts as a form of free speech.

This week, Wyoming’s District Court ruled that the law unconstitutionally restricted free-speech rights, and unlawfully targeted those interested in monitoring the environment.

“There is simply no plausible reason for the specific curtailment of speech in the statutes beyond a clear attempt to punish individuals for engaging in protected speech that at least some find unpleasant,” wrote District Court Judge Scott W. Skavdahl in his ruling.