‘Dairy was a deal-breaker’ in writing NAFTA’s successor, says president 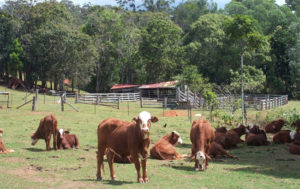 President Trump veered between predicting easy approval of the new Canada-Mexico-U.S. trade agreement and expressing concerns about opposition to the pact on Monday while declaring that the agreement “is a very, very big deal for our farmers.”

Some 1,700 U.S. communities have worrisomely high levels of nitrate in their water supplies, and two-thirds of those communities, serving more than 3 million people, have no treatment system to remove it, said an Environmental Working Group report released today.

On Monday, President Trump, before announcing the new North American trade pact, said, “We’ll be doing something very important in Iowa.” The remark was interpreted to mean action on the year-round sale of E15.

Grocers approached USDA about SNAP data (New Food Economy): The National Grocers Association reached out to the USDA during its campaign to keep SNAP sales data confidential even though the USDA was not contesting a court decision to release the material.

Dangerous stress among Canadian farmers (iPolitics): Some 45 percent of Canadian farmers who took part in a mental health survey fell into high-stress categories, says a university researcher. Suicide rates for farmers are 20 to 30 percent higher than other sectors.

Yes, you can grow organic cranberries (Seattle Magazine): Cranberries are hard to grow without pesticides, but Starvation Alley, an organic farm in Washington State, is succeeding after years of hard work. All told, organic farms account for just 300 of the 41,500 acres of cranberries nationwide.

More sows are dying (Civil Eats): The death rate of brood sows, bred to produce piglets, has nearly doubled in three years, according to one estimate, accompanied by a rise in losses due to prolapse, when organs such as the uterus fall from their normal positions.

California dairy farmer with an Iowa farm (Esquire): California Rep. Devin Nunes celebrates his roots on a dairy farm in the Central Valley, but his parents moved their operation to Iowa in 2006, a little-known fact that the family seems to want to obscure.

Mega mosquitoes after Florence (Charlotte Observer): The vast flooding created by Hurricane Florence is producing monstrously large mosquitoes, up to 20 times larger than usual and with a vicious sting.