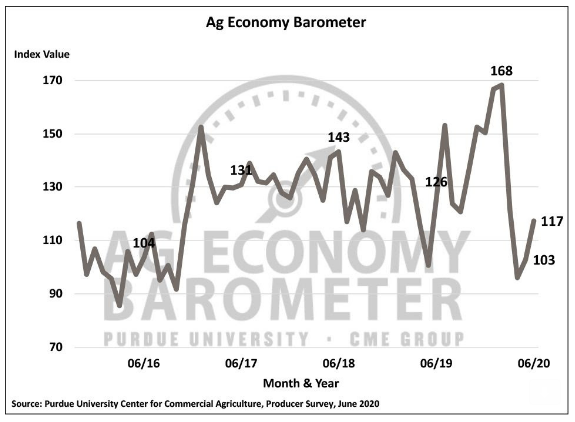 Large American farms are more confident of weathering the coronarvirus pandemic but nearly two-thirds of them say Congress should provide more assistance beyond the $16 billion already earmarked for agriculture, said Purdue University on Tuesday.

Coronavirus slowed U.S. exports of beef and pork in May

Beef exports were the smallest in 10 years during May and pork exports were the lowest in seven months, “due in part to interruptions in slaughter and processing” during the month, said the U.S. Meat Export Federation. For January through May, beef exports suffered only marginally and pork was up sharply from a year earlier.

The Organic Trade Association on Tuesday called for congressional action on two tracks to help farmworkers. The group seeks passage of an immigration reform law that would give undocumented farmworkers a pathway to legal status, and it called for safeguarding the well-being of these workers by providing protective equipment against the coronavirus.

Lobster prices fall as harvest arrives: Lobster prices at the dock are $1 to $1.50 per pound lower than normal as the harvest season gets under way in Maine, with fears they could decline further when the catch increases in volume. (Undercurrent)

Small share of PPP for agriculture: Agriculture, forestry and fishing accounted for $7.9 billion, or 1.5 percent, of the Paycheck Protection Program loans intended to help businesses avoid layoffs due to the coronavirus pandemic. (DTN/Progressive Farmer)