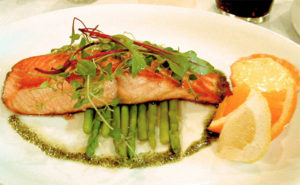 More than three years after the FDA approved, for the first time, a genetically engineered animal as safe to eat, the government opened the door for AquaBounty Technologies to grow and sell its GE salmon in the United States.

U.S. corn exports weaken (USDA): Competition from Brazil and Argentina will combine with rising U.S. prices to limit corn exports to 2.375 billion bushels during the 2018/19 marketing year, the second-lowest export total since 2007/08.

Xi and Trump unlikely to meet in March (Financial Times): U.S. ambassador Terry Branstad said no date has been set for Presidents Trump and Xi, of China, to meet, despite hopes for a summit soon to resolve the trade war.

Pesticide registration law is updated (Senate Agriculture): President Trump signed into law a reauthorization of the Pesticide Registration Improvement Act, which extends EPA authority to collect fees for registration of pesticides and also sets review periods for the chemicals.

Drug tests for food stamps (The Hill): A bill proposed in the Alabama legislature would require people to take a drug test in order to receive food stamps, and they would lose eligibility for benefits if they fail the test more than once.

Australia cotton crop down 48 percent (USDA): With harvest season at hand, Australia’s cotton crop, an estimated 2.5 million bales, is nearly half the size of the previous crop due to persistently hot and dry weather in January and February that reduced yield potential.

Monday
– President Trump releases fiscal 2020 budget proposal, which will include large cuts in USDA programs, according to Agriculture Secretary Sonny Perdue, and will propose new work requirements for able-bodied adults in order to qualify for social welfare benefits, including nutrition assistance, according to published reports.

Wednesday
– Senate Agriculture Committee hearing on the nomination of Heath Tarbert to be CFTC chairman.

– USDA holds webinar to solicit public comments on provisions of the 2018 farm policy law that legalizes industrial hemp and name USDA to supervise state and tribal regulation of the crop, noon ET. For details on how to watch the webinar or submit testimony.