Under orders from President Trump to cut spending by 5 percent, the USDA may try to slash the taxpayer-subsidized crop insurance program, eliminate a green-payment program, or take an ax to its research agencies, if recent proposals are any indication.

Leah Penniman on her new book, ‘Farming While Black’ 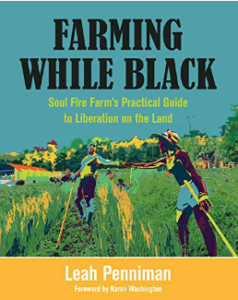 Leah Penniman is co-director and program manager of the 72-acre Soul Fire Farm in Grafton, New York, which is dedicated to training a new generation of black, brown, and indigenous farmers while working to dismantle racism and injustice in the food system. Her new book, “Farming While Black: Soul Fire Farm’s Practical Guide to Liberation on the Land,” is a first-of-its-kind guide for farmers of color.

‘Malnutrition is not inevitable’ (The Telegraph): World Food Prize laureates David Nabarro and Lawrence Haddad say the world needs “to give new meaning to the food we eat,” to ensure it is nutritious, affordable, abundant, and as waste-free as possible.

EPA to propose E15 rule by February (Reuters): Early next year, the EPA will unveil its proposal for year-round sales of E15, carrying out orders from President Trump, and would complete work on the rule by May, according to a document filed at the White House budget office.

Rice stubble and smog (Washington Post): India is trying to reduce dangerously high levels of wintertime smog in Delhi by persuading farmers in the state of Punjab to mulch their rice stubble after harvest rather than burning it, the age-old method of clearing fields for the next crop.

Burger chains score poorly (Consumer Reports): Only two of the top 25 burger chains, BurgerFi and Shake Shack, serve beef from cattle raised without antibiotics; 22 of the chains “give no indication of having a policy that limits antibiotics in the beef they serve.”