Hog prices below cost of production because of trade war 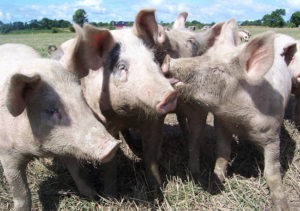 Pork producers will struggle through this winter with market prices below the cost of production, says economist Chris Hurt of Purdue University. “Record pork production and trade disputes continue to be the near-term drag on prices,” wrote Hurt at the farmdoc Daily blog.

Farm bill passage delayed to next week (AP): The House delayed votes on all legislation, including the 2018 farm bill, until next week, due to the funeral for former president George H.W. Bush, said a Senate staff worker.

Wyoming won’t challenge ag-gag repeal (WyoFile): The deadline has passed for Wyoming to appeal a judge’s decision to overturn its ag-gag law, ending years of litigation over the controversial law.

Saying goodbye to the checkout line (Wall Street Journal): Amazon is testing cashier-less checkout technology, which some speculate could be rolled out at Whole Foods stores.

Smallest wheat crop in a decade Down Under (Reuters): Australia’s wheat crop will be the smallest in a decade due to drought, jeopardizing wheat sales from the world’s fourth-largest exporter.

Green light for ‘gene drive’ research (Washington Post): Language approved by a UN biodiversity conference allows scientists to continue their work on so-called gene drives that push modified genes through a population. The approach might be used to combat diseases such as malaria spread by mosquitos.