Trump’s trade war knocks soybeans out of running for top U.S. crop for a decade 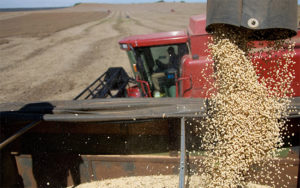 The neck-and-neck race between soybeans and corn for the title of No. 1 U.S. crop is over after one lap, with corn the victor and soybeans out of the running due to trade war with China. The USDA says corn will be the acreage king for years to come while soybeans recover slowly from the loss of sales to China, which used to buy one of every three bushels of U.S. soybeans.

Agriculture Secretary Sonny Perdue aims to announce the new homes for two USDA research agencies in early 2019, potentially relocating them as far away as California to save money and make it easier to recruit workers. The inspector general, however, will review whether Perdue can act on his own, announced two lawmakers.

Tighter rein possible on SNAP waivers (Crow River Media): To resolve a stalemate over work requirements for SNAP, the 2018 farm bill may let the administration reject state waivers of the 90-day limit on food stamps for able-bodied adults aged 18-49 without dependents, said the senior House Democrat in the negotiations.

Did Perdue cross the line? (Atlanta Journal-Constitution): A good-government group says in a complaint filed with USDA that Agriculture Secretary Sonny Perdue engaged in politicking in violation of the Hatch Act, during a supposedly nonpartisan town hall meeting in Illinois, by saying “we need … very much” to have Rep. Mike Bost’s perspective in the House.

Bayer might settle glyphosate cases (Reuters): Bayer “will resolutely and with all means defend ourselves” in lawsuits blaming glyphosate for causing cancer, said chief executive Werner Baumann, but it might settle lawsuits if the costs of legal defense are larger than the potential settlements.

‘Our water is screwed’ (New York Times): Rural communities call the discovery of contaminants in their well water, that may come from farm runoff or industrial sites, their own private Flint.

Shorter leash for state rules on dicamba (DTN/Progressive Farmer): The EPA has warned state officials that the bedrock federal law regulating pesticides, rather than supporting state restrictions on chemicals such as dicamba, may be interpreted solely for expanded use of them.

Tuesday
– Midterm elections. The “four corners,” the leaders of the House and Senate Agriculture committees, are unlikely to change in congressional voting. Ten of the 21 members of the Senate Agriculture Committee, including eight of its 10 Democrats, face the voters as do all 46 members of the House Agriculture Committee. If Democrats win a House majority, the tenor of farm bill negotiations is likely to change, shifting against Republican demands for new work requirements on SNAP recipients. Two Democrats on the Senate Agriculture, Heidi Heitkamp, of North Dakota, and Joe Donnelly, of Indiana, are considered among the most vulnerable senators in re-election races. Two Republicans on the House Agriculture Committee, Jeff Denham, of California, and John Faso, of New York State, are in toss-up races. Statewide referendums will decide animal-welfare standards in California and soda taxes in Washington State.

Thursday
– USDA releases monthly Crop Production and WASDE reports, noon ET. The USDA is likely to reduce marginally its forecasts of the corn and soybean harvests, with the reductions — 118 million bushels of corn and 52 million bushels of soybeans — being subtracted from year-end stocks, according to traders in a Bloomberg survey. The soybean crop still would be the largest ever and the corn harvest the second-largest on record; soybean stocks would be the largest ever.

– USDA hosts a webinar on “Rural America at a Glance, 2018 edition,” 1 p.m. ET. The annual report summarizes the status of conditions and trends in rural areas.

Sunday
– Centennial of the truce that ended armed conflict in World War I on the 11th hour of the 11th day of the 11th month of 1918. Armistice Day was observed informally beginning in 1919. Congress passed a resolution in 1926 for an annual observance, and in 1938, Nov. 11 became a federal holiday. It was renamed by law as Veterans Day in 1954 to commemorate the service of all military veterans.