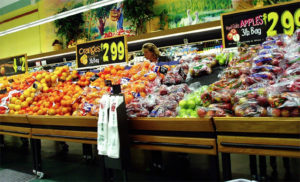 Farm bill negotiators spoke of comity and compromise while budging not an inch on major issues such as SNAP work requirements on Wednesday during their first, and possibly last, public meeting.

National food insecurity continued to decline in 2017, according to a new report from the Department of Agriculture, and now affects 11.8 percent of U.S. households, down from 12.3 percent in 2016.

Cotton stockpile to plunge in year ahead (ICAC): The global stockpile of cotton will drop by 10 percent during 2018/19 to its lowest level in seven years, driven by a sharp draw down of stocks in China, a downturn in the cotton harvest worldwide, and strong demand for the fiber.

Even blueberries get the blues (AP): Wild blueberries are a beloved crop in Maine and throughout New England, but production is down for the second year in a row as other nutrient-rich foods, particularly acai and quinoa, are dominating the “superfood” buzz.