USDA explains how it divided $4.7 billion for growers 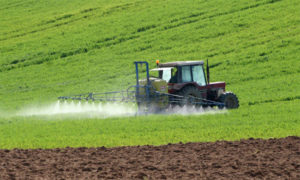 When it decides whether to make a second round of Trump tariff payments, the USDA said on Thursday, it will consider changes in tariffs, commodity prices, and other market conditions since it announced that $4.7 billion would be split among the producers of seven commodities this fall.

In blow to workers, labor board proposes redefining joint-employer standard

The National Labor Relations Board will publish a proposed rule Friday that would change its definition of a joint employer. The move would reverse an Obama-era decision that had made it easier to hold parent companies, such as restaurant chains, accountable for the labor violations of franchisees.

Three Republican senators said on Thursday that re-entering the Trans-Pacific Partnership could speed up the process of finding alternative markets for farm exports now that China has closed its door to them.

When Sonny Perdue announced he would move the Economic Research Service out of Washington, he said it would make it easier to recruit and retain qualified staff. But after a review of USDA data, a professional statistics group says the problem of staff turnover doesn’t exist.

Rep. Mark Pocan, a Wisconsin Democrat, introduced a bill yesterday that would impose a temporary moratorium on large agribusiness and food industry mergers. The bill is a companion to legislation introduced last month in the Senate by New Jersey’s Cory Booker.

Iowa wants USDA agencies (Des Moines Register): Iowa is tossing its name into the hat of states vying to be the new headquarters of the Economic Research Service and the National Institute of Food and Agriculture, which Agriculture Secretary Sonny Perdue plans to move out of Washington.

Rural kids earn more as adults (Daily Yonder): Penn State researchers say that the farther away from a city a person is raised, the more likely that person is to be economically successful as an adult.

To build a robot, watch a fly (NPR): Scientists in the Netherlands used the fruit fly as the inspiration for an agile flying robot with a one-foot wingspan.

African swine flu found in Belgium (Reuters): France called for protective action following the discovery of African swine flu, a disease deadly to hogs though not a threat to humans, in wild boars in Belgium near its border with France.

GMO pioneer retires (Successful Farming): Mary-Dell Chilton, who shared the World Food Prize in 2013 with two other groundbreaking scientists in the development of GMO crops, is retiring after a remarkable 35-year career at Syngenta.