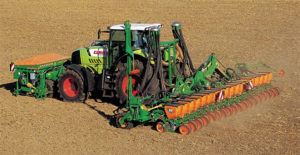 According to a USDA plan developed for the brief shutdown earlier this year, if there is a partial government shutdown at the end of this week offices running the farm program would be closed, which probably would mean that Trump tariff payments would be delayed until the government opened again.

New WOTUS sows confusion (The Intercept): Experts use the example of ephemeral vs. intermittent streams to argue that, despite assurances from the EPA that its new definition of clean-water laws will make it simple to tell if a waterway is regulated by the agency, it won’t be easy to tell what’s covered and what’s not.

Zinke’s out; who’s next? (@realDonaldTrump): President Trump said on Twitter that he will announce a successor to Interior Secretary Ryan Zinke this week.

Pack up and move (New York Times): Partly due to technology, economic growth is bypassing rural America, says economics writer Eduardo Porter, who suggests the answer is to help people relocate to urban areas, “where the opportunities are.” The Daily Yonder calls that cruel and shortsighted.

Friday
– Solstice and first day of winter in the northern hemisphere, with the short period of daylight of the year. “Coincidentally, December’s full moon—the Full Cold Moon—will also appear on the night of the 21st, though it will not be at its absolute peak until the next day,” says the Old Farmer’s Almanac.

– USDA releases monthly Food Price Outlook, 9 a.m. ET. At present, the USDA forecasts food inflation at a below-normal 1.25 percent this year and 2 percent in 2019; the 20-year average is a 2.4-percent increase annually.