Industrial Hemp Poised for Mainstream Use

(AP) –  In a flourish of political pomp, Sen. Mitch McConnell signed the final draft of the farm bill Monday with a hemp pen, grown and made in Kentucky. It wasn’t accidental. 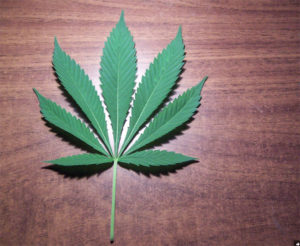 The legislation legalizes the production of industrial hemp, a multipurpose, quick-growing plant that farmers in Kentucky, Virginia, Texas, and Tennessee have eyed for decades as a replacement for tobacco and which is expected to grow into a multibillion-dollar industry.

From the hay fields of southern Oregon to the tobacco hollers of North Carolina, hemp growers, processors and researchers have been prepping for legalization.

“A lot of intellectual capital, from seed to extraction equipment, is already deployed and ready to go,” said Mitch Baruchowitz of Merida Capital Partners, which invests in the cannabis industry.

Industrial hemp is a close cousin of marijuana and they both share the name cannabis sativa. While farmers breeding for medicine or intoxication selected stocky plants with resin-rich buds, hemp, by law, must have less than 0.3 percent of THC, the psychoactive ingredient in cannabis.

Still, a field of industrial hemp plants, especially the kind grown for oil extraction, is nearly indistinguishable from a field of pungent, bud heavy marijuana plants.

America used to be a player in the global hemp business. George Washington and Thomas Jefferson both grew large tracts of “Indian hemp,” which was used for making rope, clothing, candle wicks and more.

While hemp seeds and oil were not widely used at the time, Washington wrote in his diary about “inhaling the smoke from leaves” for sedative effects. And while Uncle Sam pushed “Hemp for Victory” during World War II, the escalating drug war in the 1950s pushed the plant back into the closet.

Once the farm bill is signed into law, farmers and food makers will be able to legally grow, process and ship the controversial plant across state lines and meet demand for a soaring market in products made with cannabidiol, or CBD, one of the many phytochemicals in the plant and current darling of the wellness industry.

In a recent report, the cannabis industry group Brightfield estimates that the hemp-CBD market alone, used for everything from aiding sleep and joint pain to reducing inflammation, could hit $22 billion by 2022. That doesn’t include hemp fabric, fibers, foods or materials.

“America is helping to unleash the full economic potential of the plant,” said Paul Rosen, the CEO of Tidal Royalty, a Toronto-based investment and operation firm for “the legal cannabis industry,” including CBD beauty, food and medical products. “This is a bellwether moment for global sensible cannabis reform.”

This will be the second shot in the arm for the American cannabis industry in 2018. Just after Halloween, when cannabis opponent Jeff Sessions stepped down as Attorney General, cannabis stocks spiked — a bump to a sector that had already been bullish.

According to industry analysts, growers and investors, the seemingly tiny provision in the farm bill will lubricate more than hemp production. It will also spur growth for the closely related cousin, marijuana, that is still an illegal narcotic under federal law, despite the normalization sweeping the nation and globe. “These plants will bootstrap on each other,” said Rosen of Tidal Royalty. “If you look at how we are researching hemp and cannabis, a lot is redundant. We should be studying one plant.”

Madeline Leighman, a cannabis industry insider in Portland, Oregon, who has helped launch and grow assorted Oregon cannabis brands and churns out weekly video reports via instagram, is bullish on bioplastics, sustainable materials and organic fashion built on hemp material.

“The packaging-to-product ratio in our industry is absurd,” referring to the multiple layers of tamper-proof plastic often required by medical marijuana laws. “It’s against the ethos of our industry, and compostable hemp plastics could help fix that.”

Not every hurdle has been removed. The FDA still requires “claims have not been verified” statements on hemp-based supplements and oils. But hemp and CBD farms will now be able to legally use banks, take credit card payments, ship across state lines and even export products.

CBD-enhanced foods like Pot D’huile Oil and Alto Essentials, which have only been sold on the West Coast, where cannabis is legal for adults, plan to start shipping to New York, Massachusetts and other states.

“The people who lost their cannabis growing license or their dispensary license are going to move into hemp,” said Leighman. “Ideally the consumers and industry will simultaneously drive demand for organically produced hemp.”

“It’s not necessarily going to slingshot the American industry,” said Rosen. “But significantly, the law removes all ambiguity.”

That will help American farmers and companies in a supply chain now dominated by foreign players. China produces 70 percent of the world’s industrial hemp, with France and other European nations filling the remainder. “CBD is going to win. But in 3-5 years there will be other compounds we are using widely that aren’t even in our current lexicon,” said Rosen.

Analysts expect to see even more CBD-enhanced lotions and potions, not to mention hemp seeds for snacking and hemp oil for cooking.

In New York, dozens of farmers got permits this past spring to grow a research crop of industrial hemp. In Bridgehampton, New York, David Falkowski raised one acre to press into CBD oil, which he sells under the Open Minded Organics label.

Farmers like Falkowski are still pinching themselves that they can legally grow cannabis and turn it into food and medicine. Next year, they’ll have more competition.