(AP) Hurricane Michael tore through some of Georgia’s most productive farmland Wednesday afternoon and evening, packing winds as high as 120 miles per hour and destroying vulnerable cotton, peanuts, pecans and vegetable crops, in addition to significant property damage. 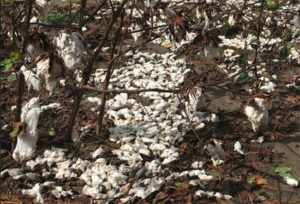 Accurate estimates of crop and property damage will be weeks in assessing, but reports from consultants, farmers, Extension and Georgia Department of Agriculture sources indicate massive losses.

“Hurricane Michael’s impact has been the most widespread and devastating hurricane in recollection to impact Georgia’s agriculture industry. Crops, animals and infrastructure have taken a substantial loss,” said Commissioner Gary Black.

“We are thankful for the safety of our farmers and families in South Georgia,” Commissioner Black said. “Power and products can be restored but human lives cannot.”

Tom Windhausen, Mitchell County, Ga., cotton farmer, says he has “seen more cotton left in the field after he picked than what is left now.”

Windhausen farms 800 acres of cotton on his own.  He says yield potential the last three years has been good. He harvested decent yields last year, even after the storm, but says potential before Irma hit was close to three bales. He expects nothing out of this crop.

Property damage on Windhausens operation  is minimal but he says two gins he uses, one in Climax, Ga., the other in Hartford, Ala., sustained “some damage. We’re not sure how much.”

“I think we got up to 125 mph winds from Hurricane Michael. We worked through 50 inches rain and cloudy weather this summer, never getting behind. Crop management has been a struggle, but we somehow managed to make a decent crop before this storm. It was a hard year and we invested a lot in the crop. In 24 hours, it’s gone.”

Briggs says only about 10 percent of the cotton he covers had been harvested when the storm hit. “I fear it’s a total loss. Peanuts that were plowed up may be in next county; sweet corn is flat on the ground, along with hundreds of pivots, shops, and pecan orchards. Chicken houses are flat. Every commodity will be affected. All crop duster planes are damaged, and tops are blown off hangers and shops everywhere.

“I’ve been doing this for 30 years and recall 1995 when Opal hit. We lost a lot of cotton. But it was nothing like this.”

He says pecan groves have been devastated. “Peanuts not yet dug probably will be OK.

He’s thankful he and his family are safe. “Mercy, this is a day we will never forget; all my family is safe. Thank you, Lord for protecting our family.”

A Georgia Department of Agriculture report indicates: “As of 9:30 this morning (Thursday), 53 poultry houses destroyed across Coffee, Houston, Mitchell, Wilcox and Decatur counties. Only 5 percent of pecan, 15 percent of cotton, 30 percent of vegetables and 50 percent of peanut harvest was complete when the storm hit. We are starting to get reports regarding damage to these crops.”