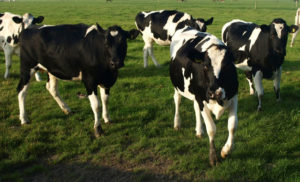 After a bit of wrangling and posturing, Congress has finally passed a new farm bill and President Donald Trump has signed it into law.

So, what does this mean for dairy? For farmers, the new bill includes overhauled risk management programs that are reported to be more affordable and accessible for participants.

The new insurance products will help producers manage margins in periods of low milk prices, and you can participate in more than one program at a time.

An important new provision changes the Class I fluid milk price formula under federal order programs. The Class I formula will no longer be subject to the higher of Class III or IV price.

Under the bill, the monthly Class I mover will be the average of Class III and Class IV prices, plus 74 cents. This change is a major improvement to the pricing system and was supported by both processors and cooperatives. The new formula is revenue-neutral.

There are other notable dairy-related items in the new bill:

• The Dairy Forward Pricing Program will be extended to Class II, III and IV through 2023. This forward pricing program allows producers to voluntarily enter into forward price contracts with handlers for pooled milk used for Class II, III or IV purposes under federal orders.

• There will be a new dairy product donation program where farmers and processors can join with charities and donation groups to offer food assistance and help minimize waste.

• Another key provision is a new Healthy Fluid Milk Incentives Projects Program designed to educate SNAP participants and the public of the many health benefits of drinking milk.

On Dec. 6, U.S. Secretary of Agriculture Sonny Perdue announced that local schools would be able to offer flavored 1% low-fat milk to children participating in school meal programs along with participants in the Special Milk Program for Children and the Child and Adult Care Food Program.

Nearly 99,000 schools and institutions that feed 30 million children annually through USDA’s school meal programs will benefit from this change. Perdue says the rule is part of the USDA’s Regulatory Reform Agenda to eliminate unnecessary regulatory burdens.

Several studies, including those by USDA, have shown that students consumed less fluid milk after more palatable low-fat flavored varieties were eliminated six years ago. The new rule is a positive step for the industry.

Everyone is still waiting to see the impact of the new trade agreement between the United States, Canada and Mexico. It must still be ratified by all three governments.

While many ag leaders in the U.S. remain skeptical of the benefits of the trade deal, farmers in Canada seem downright upset over the new agreement and think their leaders sold them out.

Ag leaders in the U.S. are watching Canada closely to make sure they live up to their parts of the agreement.

Tariffs are still a major concern and continue their negative effect on U.S. dairy exports. Cheese exports to China were down 60% in 2018.

There have been glimmers of hope as President Xi and Trump have talked about easing the situation between the two countries.

The early December meeting between the two leaders at the G20 summit in Buenos Aires led to a 90-day truce where the U.S. would delay plans to elevate tariffs from 10% to 25% on $200 billion worth of Chinese imports.

In return, China would agree to purchase a not-yet-agreed-upon amount of agricultural, energy, industrial and other products from the U.S.

Mexico remains the largest importer of U.S. dairy products and purchased $1.2 billion last year. Mexico purchases about 75% of its dairy products from the U.S. Retaliatory tariffs remain in place, resulting in 10% less cheese exports to Mexico in 2018.

Despite lower sales of dairy products to Mexico and China, the U.S. Dairy Export Council claims we are on track for another record year of exports.

Production down, but prices lag

Production growth is showing signs of slowing down. In its latest report, the USDA announced production for October was up 1.0% for the top 23 states and up 0.8% for the entire U.S.

The loss of milk cows was offset by a 20-pound increase in output per cow resulting in an average of 1,934 pounds.

Once again, production per cow set a record and is the highest for the top 23 states since the series began in 2003.

Some experts are puzzled as to why prices haven’t climbed more from seasonal holiday demand. A few of them have attributed it to large inventories that provide more than adequate stocks to fill domestic holiday needs.

The continuing decline of the fluid milk category is no-doubt influencing farm prices, too.

USDA expects strong growth in production per cow in 2019 to offset expected declines in cow numbers. The agency expects weak cheese prices to turn upward during the second half of 2019 and will provide a modest increase to Class III prices next year.

Dry whey and nonfat dry milk prices are also expected to be higher overall in 2019, but nothing big.

If tariffs end, trade expands, school purchases increase and a few other positive things happen, milk prices might just end up on the higher side of these estimates.