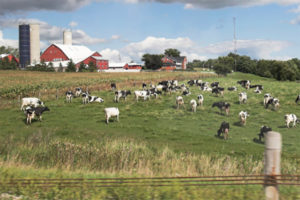 The suit highlights broader efforts by agribusiness to silence opposition from rural residents who speak out against large concentrated animal feeding operations in their communities.

Daley Farms of Lewiston wants to expand its dairy operation from 1,728 cows to 4,680, which requires a state permit.

At its current size, the farm technically exceeds county herd limits, but the operation was exempted from regulation through a grandfather clause.

The MPCA opened a 30-day public comment period to weigh community concerns and determine if the agency should conduct a full environmental impact statement on the expansion.

Due to the demands of harvest season, community members petitioned to extend this public comment period for another month; they received two more weeks.

Corporate agriculture interest groups, including the Minnesota Farm Bureau, the Minnesota AgriGrowth Council, and five commodity associations, sued the MPCA on the grounds that the agency does not have the authority to extend the comment period and called for its immediate end.

Last week, a judge ruled that the agency does indeed have this authority, and the comment period is still open.

“It was a strange suit; the operation at issue wasn’t even one of the plaintiffs,” explains Barbara Sogn-Frank, factory farming policy organizer for the Land Stewardship Project, whose members requested the longer comment period. “Corporate ag doesn’t want the public to weigh in, and so they keep working on trying to chip away at that.”

Across the country, rural residents are voicing concerns about the environmental and economic impacts of increasingly large concentrated animal operations in their communities.

In September and October alone, a Missouri community halted a large cattle feedlot expansion; a Wisconsin county put a temporary moratorium on livestock operations with more than 1,000 animals; tribal leaders and Devils Lake residents in North Dakota came together to oppose a proposed hog farm; and a southern Minnesota community called for an environmental impact statement on a different proposed hog farm.

For agricultural communities, safe drinking water is a particular worry. Agricultural runoff can seep through the ground and pollute aquifers. Ninety-nine percent of rural communities drink groundwater, and many households rely on private wells.

A recent report by the Environmental Working Group found that small farming communities are more likely to have polluted drinking water and simultaneously less able to pay for water treatment programs.

In the case of Winona County, towns around Daley Farms already have elevated levels of nitrates in their drinking water that are near or above state-mandated maximums.

The feedlot sits on sensitive geology with porous limestone that makes it more prone to sinkholes that could drain manure and other contaminants directly into aquifers.

The expansion would also strain the local water supply, as Daley Farms would use roughly 92 million gallons a year, nearly three times as much water as the nearest town.

Winona County residents are split in their opinions on Daley Farms. An MPCA hearing drew large public interest from both opponents and supporters of the expansion. “It can be conflicting and difficult for a community,” says Sogn-Frank. People “may really appreciate their neighbors who want to expand their operations, and understand their reasoning … but at the same time … when you’re talking about doubling your production of waste and doubling your use of water, you know no matter what plan is in place, that is going to have an impact. So it’s not easy for people.”

The suit claimed that the longer comment period would harm Daley Farms by delaying it expansion.

This lawsuit is not the first instance of corporate ag groups maneuvering to limit public discussion about large farms. Eight states have passed ag-gag laws, which criminalize recording or filming inside an animal facility without an owner’s permission.

The nation’s first ag-gag bill passed in Iowa with the help of the Iowa Farm Bureau, the Iowa Dairy Association, Monsanto, and others.