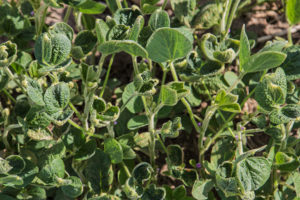 Monsanto proudly says its low-volatility formulations of dicamba, coupled with cotton and soybean varieties genetically modified to tolerate doses of the herbicide, are an effective tool against invasive weeds. But weed scientists report that damage to neighboring fields and susceptible nearby crops is a recurring problem this year.

Far more than farmer revenue is at stake in the threatened loss of SNAP sales at 40 percent of U.S. farmers markets, said the National Sustainable Agriculture Coalition on Monday. “We believe that farmers’ ability to serve low-income families is not just important for their bottom line but also critical to genuinely healthy food systems,” it said.

Canada expects to be back soon at NAFTA negotiations

The three-country negotiations for the new NAFTA have looked bilateral for a few weeks, because the United States has been meeting with Mexico. But Prime Minister Justin Trudeau said on Monday that Canada expects to return to the talks very soon.

Tyson, the largest U.S. meat company, will buy Keystone Foods for $2.16 billion. Keystone’s prior owner, Marfrig Global Foods, announced the brand was up for sale earlier this year. The deal will face regulatory review in at least the U.S. and China.

As a result of a Trump administration immigration policy, crab houses on the Eastern Shore of Maryland have been short on labor this summer. Midway through the crabbing season, some companies are losing customers and profits in what might be the new reality for an industry dependent on immigrant labor.

A pig for every Spaniard (Guardian): For the first time, Spain has more pigs than people – 50 million vs. 46.5 million – and there are growing concerns about the impact of large-scale livestock production on the environment. Hog farms need large amounts of water in a country that frequently suffers drought.

Monsanto verdict not ‘in vain’ (CBS News): The terminally ill groundskeeper who won $289 million in a cancer lawsuit against Monsanto said the verdict will be a warning to others about the potential dangers of chemicals. “You can’t just die for nothing,” he said.

Third case of swine fever in China (Bloomberg): The Chinese Agriculture Ministry is investigating if there is a link between three outbreaks of African swine fever, according to state radio. This is the first outbreak of the disease in China and may lead to stricter inspection of imported pork and culling of domestic hog herds.

‘Smiley face’ GMO logos disappear (National Law Review): The USDA caught some heat for its proposal of “smiley face” logos to identify food made with GMO ingredients. It took a different approach early this month in a filing with the U.S. Patent Office of six bioengineered symbols that dispense with cartoonish smiles and carry the words “Bioengineered,” “Made with bioengineering” or “May be bioengineered food.”

‘Weed’ heightens concern about weedkillers (Forbes): The legalization of medicinal and recreational marijuana has increased the focus on biopesticides and other alternatives to chemical herbicides.

Food at the fair (The New Food Economy): It’s fair season and a quiz asks Is “deep-fried turducken on a stick” for real? How about tamale doughnuts or a “double bacon corn dog with maple syrup?”