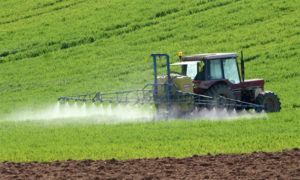 On the same day that President Trump nominated Andrew Wheeler to be EPA administrator, the agency said it would withdraw a Trump-era proposal to set a minimum age of 16 for farmworkers to handle, mix, or apply pesticides, down from the age 18 limit specified in a 2015 regulation.

Ag trade is a top topic at Sino-U.S. trade talks

Trade officials from China and the United States discussed “China’s pledge to purchase a substantial amount of agricultural, energy, manufactured goods, and other products and services from the United States” during three days of talks in Beijing, said the Trump administration on Wednesday.

Trump to speak at Farm Bureau convention (Ag Insider): President Trump is scheduled to speak, for the second year in a row, to the largest U.S. farm group, the American Farm Bureau Federation, on Monday at its centennial convention in New Orleans.

Another ag-gag law bites the dust (ALDF): The U.S. District Court for the Southern District of Iowa struck down the state’s ag-gag law, ruling that it violates the First Amendment.

Food safety on the line during shutdown (Washington Post): The FDA has sharply reduced its food safety inspections during the government shutdown because hundreds of agency employees have been furloughed.

Palm oil is the new tobacco (Reuters): In a new study, the World Health Organization said the palm oil industry is deploying tactics similar to those used by the alcohol and tobacco industries to influence research into the health effects of its products.

‘King amendment’ revived as House bill (Rep. Steve King): House Agriculture chairman Collin Peterson joined as a co-sponsor in Iowa Rep. Steve King’s latest attempt, HR 272, to limit the impact of California and Massachusetts laws that bar the import of eggs, pork, and veal that are not produced under conditions that match their animal welfare standards.

The future of farming (Financial Times): Farming is becoming less appealing to younger people in Europe, where, as in the United States, family farms dominate production; “aging and succession” is considered a major challenge to EU agriculture.

EPA says it will rule in time on E15 (Reuters): The EPA says that despite the partial government shutdown, it will complete work before the summer driving season on a White House initiative to allow the year-round sale of E15.

New Jersey wage hike could exclude farmworkers (New Food Economy):   Although state legislators are considering a $15-an-hour minimum wage, farmworkers may have to wait years for their hourly rate to reach the level required for urban workers.