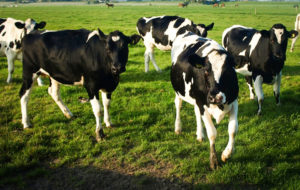 U.S. farm income is higher than expected this year and is regaining its footing after taking a tumble early this decade, said the Agriculture Department on Thursday. Nonetheless, net farm income will be the lowest since 2006, and the debt-to-asset ratio is rising for the sixth year in a row.

Dairy is the big farm issue for NAFTA, says Perdue

Dairy is not the only agricultural dispute between the United States and Canada, but it is the biggest one, according to Agriculture Secretary Sonny Perdue. Senior U.S. officials say the new NAFTA must include greater U.S. dairy access to Canada.

State regulators call for early cutoff date for dicamba use

Many states have reported significant complaints from farmers about dicamba damage to their crops and plants, said an association of state pesticide regulators in calling for the EPA to tighten its rules on use of the weedkiller.

U.S. citrus harvest down 20 percent in one year

Citrus production has trended downward for years, but it dropped abruptly, by 20 percent, in the just-ended 2017/18 season, affected greatly by Hurricane Irma in Florida, said the USDA in its annual Citrus report.

Suit seeks info on RFS waivers (RFA): In a lawsuit filed in federal court, two ethanol trade groups are seeking an order forcing the EPA and the Energy Department to release the details of “hardship” waivers granted to small refineries that exempt them from compliance with the Renewable Fuel Standard.

Trump’s war on weed (BuzzFeed): The White House has created an informal Marijuana Policy Coordination Committee to speak against state-level legalization of marijuana; agencies have been told to provide “data demonstrating the most significant negative trends” about legalization.

Sage grouse again a ‘threatened’ species (AP): A federal judge reinstated the listing of the bi-state sage grouse as a threatened species and ordered the Interior Department to complete an analysis of the bird’s future by Oct. 1, 2019.

‘Neonics’ ban to take effect (Phys.org): France will have stricter rules than the EU when its ban on five neonicotinoid insecticides takes effect on Saturday. The chemicals are blamed for harming bee populations, but farmers say they have no alternatives to use against pests.

Long arm of the law is short-handed (Sacramento Bee): In large swathes of rural California, county sheriffs say they don’t have the staff to protect the public. “We have no money. We have no people,” says one sheriff.

What’s in your hog lagoon? (Guardian): Industrial hog farms in North Carolina underreported levels of key pollutants in their waste lagoons, state regulators discovered when they compared samples from 55 lagoons with information filed by the farmers.