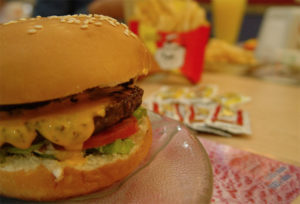 Roughly 37 percent of U.S. adults eat fast food daily, says a CDC analysis of dietary data, but the rate is much higher for men and women aged 20-39 and for higher-income people.

House Agriculture chairman Michael Conaway says he tried to help every section of the country in his version of the 2018 farm bill. But one of the House provisions, to give some but not all growers the opportunity to potentially increase their subsidy payments, “does not seem prudent,” said four university economists.

With the food world convulsed over allegations of sexual misconduct and other gender-related problems, the James Beard Foundation, a leading supporter of the culinary arts, is overhauling its awards program to increase the diversity of the people and organizations it honors and the transparency of how it makes those decisions.

Climate change is forcing farmers to migrate from Central America

In Central America’s Dry Corridor, a historically drought-prone region that stretches from Mexico to Panama and is home to 10.5 million people, climate change is producing longer and more frequent dry spells and forcing a growing number of farmers to attempt to migrate to the U.S.A.

Missouri farmland values up 7 percent (Missouri Extension): In a web-based survey, farm lenders, appraisers and farmers said good farmland was worth a surprisingly strong average of $5,217 an acre in July, an increase of $340, or 7 percent, from last year.

Glyphosate residues within legal limits (Food Safety News): The FDA found residues of the weedkiller glyphosate in two-thirds of the corn and soybean samples that it tested, but none violated the agency’s tolerance levels.

Small farmers try cooperative model (Civil Eats): While American agriculture tends to be solitary — one farmer or family per farm — some farmers are trying the cooperative structure of shared ownership of land or joint use of labor and equipment.

The USMCA loyalty oath (Politico): The new NAFTA includes an agreement among the three North American countries to give three months’ notice of intent to negotiate with a non-market economy (i.e. China).

Response rate dips for Ag Census (USDA): Some 71.5 percent of farmers replied to the twice-a-decade Census of Agriculture, down from 74.5 percent in 2012.