After months as an ideological flashpoint, a toned-down farm bill is on track for bipartisan passage in Congress this week, short of a proposal for stricter SNAP work requirements. Enactment won’t end debate over the status-quo legislation.

Opposition mounts as Arkansas moves to roll back dicamba ban

The Arkansas State Plant Board voted to roll back restrictions on the drift-prone herbicide dicamba late last week, over the objections of a coalition of sustainable agriculture and conservation groups. The board denied, without a hearing, an organic farmer’s petition to uphold the restrictions.

The future looks grim for the industrial egg 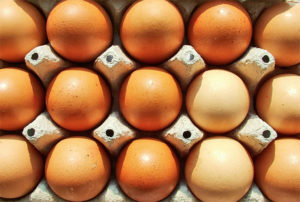 California’s Prop 12, which prohibits the sale of eggs in the state from chickens housed in battery cages, along with the arrival of the first viable egg substitutes, deliver a one-two punch that could mark the beginning of the end of the industrial egg, writes Rowan Jacobsen in the latest story, published with New Food Economy.

Reducing the reach of clean-water law (New York Times): The Trump administration is expected to release on Tuesday its rewrite of the Obama-era “waters of the United States” rule, which will exempt from oversight streams and tributaries that don’t run year-round and wetlands that are not directly linked to larger bodies of water.

Former Ag secretary Bergland dies (AP): Former agriculture secretary Bob Bergland, who defended President Carter’s embargo of grain sales to the Soviet Union, died at age 90 in his hometown of Roseau in northern Minnesota, near the border with Canada.

Indoor farming at home (Medium): The future of indoor farming could be very small-scale, perhaps lots of people growing a small but steady amount of food plants at home, rather than warehouse-sized operations that use lots of electricity to grow vegetables without soil, says a plant physiologist.

Thin, log and burn (Washington Post): The U.S. Forest Service plans a 15-year make-over of 850,000 acres , or 1,328 square miles, of the Medicine Bow National Forest though logging, thinning of trees and prescribed burns to recover from “epidemic levels” of beetle infestations that killed millions of trees.

Eighty victims of E. coli linked to romaine (Food Safety News): With reports of nearly 80 people in the United States and Canada ill in an E. coli outbreak linked to romaine lettuce, the FDA said at least 10 distributors, 11 farms and 12 growers are implicated, based on shipping records.

Bacon, it’s for finals week (AP): Timed for finals week, a vending machine that sells cooked strips of bacon and bacon bits for $1 has been installed at Ohio State University’s Ag school, with proceeds to support OSU’s meat sciences program.

– The U.S. trade representative’s office holds a public hearing to gather ideas for objectives in upcoming trade negotiations with Japan.

– International Food Policy Research Institute and the EU mission to the United States host a seminar, “The future direction of U.S. and EU agricultural policy.” Speakers include Agriculture Undersecretary Bill Northey and Jerzy Plewa, director general of the EU directorate on agriculture and rural development.

– The House could vote as early as today on the final version of the farm bill, according to the schedule posted by House Majority Leader Kevin McCarthy. The House will meet through Thursday for floor debate.