U.S. farmers will reap a record-large soybean crop in the middle of a trade war with China, ordinarily the No. 1 export customer for the most widely grown U.S. crop, with no replacement buyer on the horizon.

House Ag chairman was among investors in Innate Immunotherapeutics

In early 2017, House Agriculture chairman Michael Conaway was among U.S. representatives who purchased stock in the Australian biomedical company that’s at the center of insider-trading charges against New York Rep. Chris Collins. 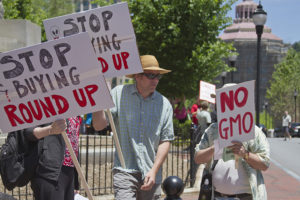 A California state court jury awarded $289 million to terminally ill Dewayne Johnson on grounds that Roundup, the most widely used weedkiller in the world, gave the former school groundskeeper cancer. The maker of the herbicide, Monsanto, said it would appeal the verdict.

Glickman, Veneman and Vilsack: Make nutrition No. 1 (The Hill): In an essay, three former agriculture secretaries — two Democrats and one Republican — say diet quality should be a core SNAP objective in farm bill negotiations, not arguments over “work requirements for a relatively small percentage of SNAP recipients.”

Childcare rare in farm country (The New Food Economy): Farm families face unique challenges in finding childcare, from cultural expectations of self-sufficiency to seasonal shifts in schedules and inconsistent revenue flows. Scarcity of childcare is a problem for female farmers.

Birds are disappearing in Mojave Desert (Arizona Republic): In retracing the route of survey teams from a century ago, researchers reached a startling discovery: Bird populations in the Mojave Desert have suffered a massive collapse due to climate change.

Ag appropriator is in toss-up race (Sabato’s Crystal Ball): Rep. Kevin Yoder, narrowly elected to a fourth term in 2018, is in a toss-up race against Democratic nominee Sharice Davids in a suburban Kansas City district. The contest previously was rated as “leans Republican.” If elected, Davids would be the first native American woman in Congress.

Saturday
– National Honey Bee Day, “to honor the insect responsible for more than 1/3 of the food we eat” and increase public awareness of environmental concerns facing honeybees.