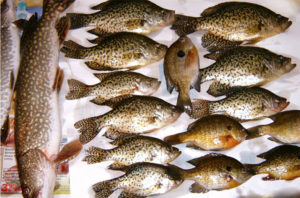 Republicans claim the House version of the Magnuson-Stevens Act, a.k.a. the fish bill, would strike “a proper balance between the biological needs of fish stocks and the economic needs of fishermen.” Environmentalists disagree. As the fight moves to the Senate, the House bill could damage fisheries management.

As House and Senate farm bill conferees try to resolve their differences over SNAP, the Berkeley Food Institute published a policy brief that shows how some proposed changes to the program would undermine the very things that make SNAP successful.

Last week, Agriculture Secretary Sonny Perdue announced plans to move two key USDA agencies out of the Washington area. This week, the debate over the proposal, both pro and con, kicked off.

More than 200 health and medical professionals from across the country sent a letter to the chairmen and ranking members of the House and Senate agriculture committees urging the farm bill conferees to reject the House bill’s expansion of SNAP work requirements.

What does the Monsanto verdict mean for thousands of pending cases?

Last week’s $289-million verdict against Monsanto was a stunner. How might it affect the more than 4,000 other plaintiffs facing off against the agrichemical giant on charges that the company’s popular herbicide Roundup causes non-Hodgkin lymphoma, a common cancer that will likely kill nearly 20,000 people in the U.S. this year?

Trade war hits crop prices (Axios): According to the Bureau of Labor Statistics, the price for U.S. agricultural exports fell 5.3 percent in July, driven mostly by a 14-percent drop in soybean prices.

Good signs on NAFTA talks (Politico): The United States and Mexico could announce a preliminary agreement for a renegotiation of NAFTA by the end of August.

JBS suppliers accused of animal abuse (BuzzFeed): A new investigation by Mercy for Animals alleges cruel treatment of chickens at farms in Brazil that supply JBS, among other meatpackers.

A watershed brewery (WAMU): In Hyattsville, Maryland, three friends have opened the first deaf-owned brewery on the East Coast.