Congressional leaders are taking a direct hand in the final farm bill fight—the Trump administration’s demands for a freer hand in fire prevention in national forests—with a decision possible as early as today that would allow a lame-duck vote on the $87-billion-a-year legislation.

Republican Hyde-Smith wins in final Senate race of the year

Mississippi Sen. Cindy Hyde-Smith, a down-the-line backer of President Trump, handily defeated Democrat Mike Espy in a runoff election on Tuesday. Hyde-Smith is a member of the Senate Agriculture Committee.

How Oakland became a leader in cutting school food waste 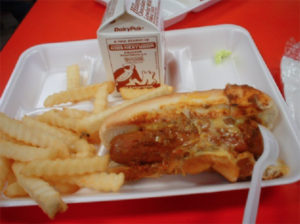 Among the 40 percent of all food thrown out is this statistic: America’s school lunch programs waste $5 million of food every day. Our latest story, published with Grist, focuses on Nancy Deming of the Oakland Unified School District, a leader in the movement to cut school food waste and redirect the food to students and people in need. Here are the main takeaways:

As Jonathan Bloom writes: “The district has arguably done more than any other in the country to minimize excess food, redistribute edible leftovers to people in need, and compost the inevitable inedibles.”

U.S. still pushing Canada on supply management (Reuters): As the U.S. and Canada prepare to sign a trade agreement on the sidelines of the G20 meeting this week, dairy policy remains a sticking point.

The cost of dairy exports (Civil Eats): The domestic dairy industry is growing its exports to account for overproduction, but export-focused mega-dairies bring manure and other pollutants to rural communities.

Owners say it’s time to sell land (Successful Farming): Land manager Farmers National says its listing of farm and ranch land for sale is up 21 percent compared to a year ago because owners believe land values are more likely to decline than rise in the future.

Do new rules obviate dicamba lawsuit? (DTN/Progressive Farmer): EPA’s updated rules on use of dicamba make moot a lawsuit that challenges the agency’s approval of the weedkiller in 2016, says Monsanto, which asked a U.S. appeals court to dismiss the case.

EPA won’t re-allocate RFS obligations (Reuters): Rebuffing corn growers and ethanol makers, the EPA will not require other oil refiners to make up for its waivers that exempt small refineries from having to comply with the Renewable Fuel Standard, which guarantees corn ethanol a share of the gasoline market, said an agency official.