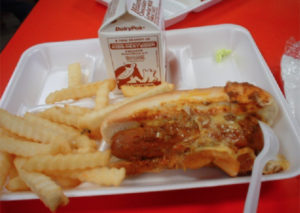 In 2017, on just his sixth day in office, Agriculture Secretary Sonny Perdue made chocolate milk safe for schools again, along with white flour and salt, in the name of “regulatory flexibility” for school food programs. On Thursday, the USDA said it will make those changes permanent.

Led by “much weaker” vegetable oil, dairy, and grain prices, the UN Food and Agriculture Organization’s index of global food prices fell to its lowest level since May 2016. The price of vegetable oil dropped to a 12-year low.

Pelosi: Farm bill ‘looks good’ (C-SPAN): House Democratic Leader Nancy Pelosi said that she got an encouraging assessment from farm bill negotiators and that “we’re hoping it can be passed maybe next week.”

Meat eaters dominate U.S. diet (Gallup): Fewer than 1 in 10 Americans follow a plant-based diet; the portion of vegetarians, at 5 percent, and vegans, at 2 percent, has changed little over recent years.

Freshman farm caucus for Democrats (National Journal): Although Democrats took control of the House largely by winning urban and suburban districts, at least a dozen of the incoming representatives have a food, agriculture, or restaurant background, making them possible members of the House Agriculture Committee in 2019.

Rolling back sage grouse protection (New York Times): In a move that would aid the oil and gas industry, the Interior Department announced a proposal to reduce protection of greater sage grouse habitat across the West to 1.8 million acres, down from an Obama administration plan to protect 10.7 million acres.

Wine country wildfires burn out the poor (Los Angeles Times): Sections of California’s wine country that were hit by wildfires now have some of the lowest poverty rates in the United States, and analysts say a likely factor is that low-income residents have been forced to relocate after losing homes in the fires.