Trump: ‘We don’t have enough votes’ for stricter SNAP rules

Banking on Republican gains in the midterm elections, President Trump said Congress could wait until next year to pass the farm bill because “we don’t have enough votes” now for stricter work requirements for millions of SNAP recipients.

In CDC report on ‘fast food,’ Sweetgreen and McDonald’s are treated as equals 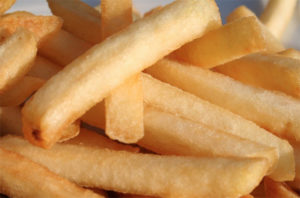 A much-publicized report from the Centers for Disease Control released earlier this month found that more than a third of Americans eat fast food daily. The high level was surprising, but what wasn’t explained was that the study’s definition of “fast food” included fast-casual restaurants, such as the salad chain Sweetgreen, as well as coffee, bagel, and even ice cream shops.

Iran: the new China for U.S. soybeans (Financial Times): Iran is importing more U.S. soybeans than some European countries in the trade war that has shut down sales to China.

Nationwide drive against sugar (Food Dive): An alliance of city health officials, consumer groups and medical professionals asks foodmakers to reduce the amount of sugar in packaged foods and beverages by up to 40 percent by 2025.

Fracking spreads across the West (New York Times): The Interior Department offered oil and gas leases on more than 12.8 million acres of land in the fiscal year that ended on Sept. 30, triple the average of President Obama’s second term.

– Organic and Non-GMO forum, “Oilseeds and grains at the crossroads,” through Tuesday, St. Louis.

– Release of “Unsavory Truth, how food companies skew the science of what we eat,” a book by nutritionist and author Marion Nestle.

Wednesday
– Boo! It’s Halloween, believed to originate 2,000 years ago in a Celtic festival ahead of the Nov. 1 start of the new year, according to the History Channel. Nov. 1 “marked the end of summer and the harvest and the beginning of the dark, cold winter, a time of year that was often associated with human death.” The festival of Samhain was held on Oct. 31, “when it was believed that the ghosts of the dead returned to earth” and caused trouble and damaged crops.

– Farm Foundation Forum, “Tariffs and the USMCA,” 9 a.m. ET, National Press Club. Dominique van der Mensbrugghe, director of the Center for Global Trade Analysis at Purdue University, will present the results of an analysis of the U.S.-Mexico-Canada Agreement. Joe Glauber, of the International Food Policy Research Institute, will deliver a response.