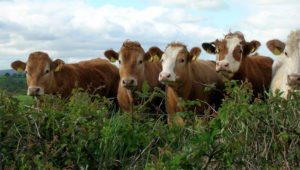 Sales of medically important antibiotics for use in food animals are down by 41 percent in two years as part of the FDA’s campaign to preserve the efficacy of antibiotics.

Large domestic hog production and low market prices will propel a larger share of U.S. pork onto the world market in 2019, according to USDA economists.

Restaurant rollup continues (Nation’s Restaurant News): There were more than 40 mergers and acquisitions in the restaurant sector in 2018, including several sales of fast-casual chains to private equity firms.

More hurdles for fake burger (Bloomberg): Impossible Foods awaits a final FDA clearance for one of its ingredients before its faux ground beef can be sold to customers to cook at home.

China buys at least five cargoes of soybeans (AgriCensus): Market sources say Chinese state-owned businesses, in a break from the trade war, bought as many as 14 shiploads of U.S. soybeans, continuing a string of purchases that began last week.

Ernst, Perdue most vulnerable on Senate Ag (Sabato’s Crystal Ball):  Republican Senators Joni Ernst of Iowa and David Perdue of Georgia are the most vulnerable of the eight Senate Agriculture Committee members facing re-election in 2020.

Trump tariff payments still a week or two out (AgriTalk): Agriculture Undersecretary Bill Northey said it takes a week or two to issue trade bailout payments, so some producers may not see their second-round payment until January and if there’s a shutdown, “timing could be disrupted.”