The average USDA coronavirus relief payment to farmers is less than $16,000 but the biggest operators are getting payments that are 22-times larger, said an environmental group on Tuesday in questioning the fairness of the $10 billion program. Meanwhile, lawmakers agreed to give more funding to the USDA so it can keep farm supports flowing.

P-EBT to be renewed for a full year, says Pelosi

The stopgap USDA program that helps low-income parents buy food for their children who miss school meals because of closures will be renewed for a full year, rather than expiring on Sept. 30, said House Speaker Nancy Pelosi on Tuesday. 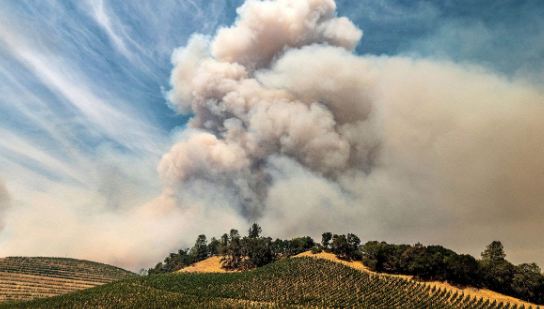 A plume rises over a vineyard in Napa County in August. AP Photo/Noah Berger

As California suffers through its worst wildfire season in modern history, agricultural workers are still going to work, risking heat, smoke, and Covid-19 to pick grapes and harvest strawberries, according to broadcast on KQED’s WorldAffairs show. Teresa Cotsirilos reports that activists in Northern California worry that 2020’s historic combination of disasters is also fueling labor abuses.

Vacant desks at USDA agency: Almost half of the jobs at USDA’s Economic Research Service were vacant a year after the agency was relocated on short notice to Kansas City; staff morale has plummeted and “the agency has lost decades of expertise on a wide range of subjects.” (The Counter)

Perdue says no cash for refiners: Agriculture Secretary Sonny Perdue said he told the White House that oil refiners do not qualify for aid from the USDA, notwithstanding published reports that $300 million would be given to refineries that were denied exemptions from the RFS. (Brownfield Ag News)

Wootan opens her own shop: Margo Wootan, the longtime vice president for nutrition at the Center for Science in the Public Interest, will open her own consulting company, MXG Strategies LLC. (The Hagstrom Report)

The Green Scheme for urban farming: Ronnie Webb runs a program in low-income Washington, D.C., neighborhoods for youth and families to help grow community gardens; “I want the kids to know an environmentalist who looks and talks like them.” (DCist)