(AGInsider) The Thanksgiving holiday is upon us, and what better time to sit back, reflect, and think about all we have to be thankful for. In our country, we are so lucky we have an abundance of safe, affordable food.

What is your favorite Thanksgiving day dish? I like fresh mashed potatoes. The U.S. produces nearly 50 billion pounds of potatoes each year! Idaho and Washington are the two states producing the most potatoes.

Wisconsin is the leading state for cranberry production. Are you surprised? When I think of Wisconsin I think of cheese, of course! Wisconsin produces 60 percent of our nation’s cranberries, which are primarily grown in five states: New Jersey, Oregon, Washington, Massachusetts, and Wisconsin. Total cranberry production is 841 million pounds per year, while Americans consume nearly 400 million pounds. Twenty percent of these cranberries are consumed during Thanksgiving week.

Green beans, the other staples Thanksgiving side dish? About 1.5 billion pounds are produced in the U.S. each year with Wisconsin, again, leading in production. The nice thing about green beans is they are easy to grow in different types of soil.

The U.S. also produces 2 billion bushels of wheat, which can be used for that Thanksgiving bread. A bushel weighs 60 pounds and the top wheat-production states include Kansas, Montana, and North Dakota.

Of course, we can’t forget dessert! Fifty million pumpkin pies are eaten on thanksgiving, and the U.S. produces nearly 1.5 billion pounds of pumpkin each year. Illinois leads in pumpkin production, followed by Indiana, Ohio, and Pennsylvania. According to Guinness World Records, the largest pumpkin pie was baked by New Bremen Pumpkin Growers of Ohio back in 2010. It weighed a whopping 3,699 pounds and was 20 feet in diameter. The ingredient list was just as impressive as the actual pie since the recipe required 187 cans of pumpkin, 233 dozen eggs, 109 gallons of evaporated milk, 525 pounds of sugar, seven pounds of salt, 14.5 pounds of cinnamon, and three pounds of pumpkin pie spice.] 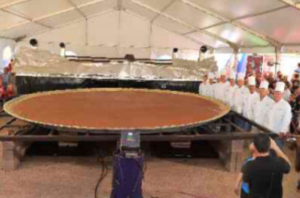 Saved the main event for last: turkey! Minnesota is the top producing turkey state and American farmers produce more than 253 million turkeys each year, and over 46 million of those are eaten on Thanksgiving. The average turkey goes to market between 13 and 21 weeks of age, with a take-home weigh of about 15 pounds. Turkeys eat approximately 60 pounds of feed in their lifetime, and for every 2.35 pounds of food they eat, they end up producing one pound of turkey meat. They eat a balanced diet of soybean meal, corn, vitamins and minerals, which may vary depending on their stage of development. Turkeys are raised in comfortable climate-controlled barns that are well ventilated. They are protected by disease and weather elements and always have access to feed, water, shelter, and clean bedding. Antibiotics are very rarely used due to vaccine innovation, and there is no such thing as added growth hormones or steroids in turkey production.

Farmers have a lot of people to feed, so I found these numbers so fascinating and hope you do, too. As we sit down to special memories, cheers to you, your health, happiness, friends, family and food!