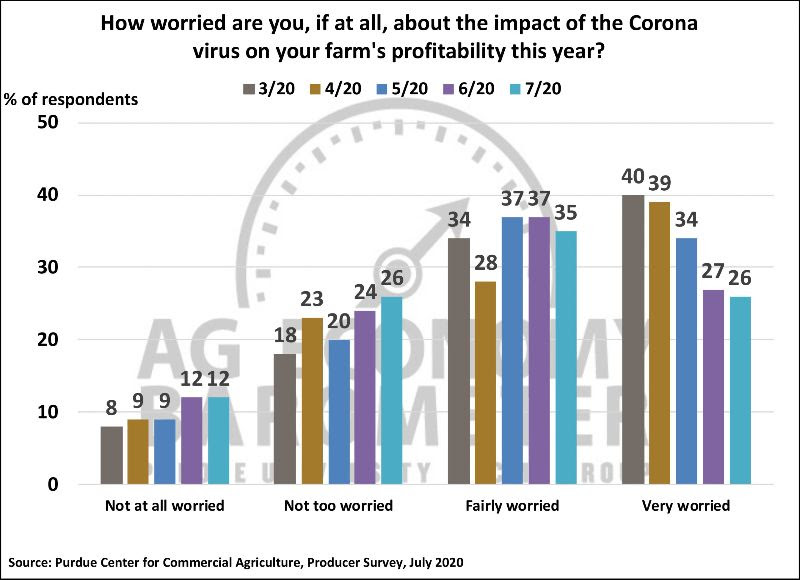 An unusually large portion of U.S. farmers and ranchers expects worse financial performance on their farms this year than last, said a Purdue University poll released on Tuesday. And although producers are less worried by the coronavirus pandemic than in the spring, they are calling for President Trump and Congress to provide more money.

The Protect America’s Children From Toxic Pesticides Act of 2020, introduced on Tuesday by Sen. Tom Udall, a New Mexico Democrat, and Rep. Joe Neguse, a Democrat of Colorado, would overhaul the nation’s framework for regulating the sale and use of pesticides to safeguard public health and the environment, the legislators said in a press call with a panel of experts.

Roughly 2.1 million acres of grasslands in the Great Plains were converted to cropland in 2018, equal to the loss of four footballs fields of land per minute, said the World Wildlife Fund on Wednesday.

Utilizing authority granted in the 2018 farm bill, the USDA said it would propose a regulation on Wednesday to expand its enforcement of the production, handling and sale of organic products.

Second-term Rep. Roger Marshall easily won the Republican nomination for Senate in Kansas on Tuesday. He is running to fill the seat of Pat Roberts, 84, the only man to chair the House and Senate Agriculture committees, who is retiring after 24 years in the Senate.

Add the word ‘ethanol’: Biofuels backer Sen. Chuck Grassley of Iowa said one additional word is needed — “ethanol” — in the proposal by Senate Republicans to give USDA $20 billion in coronavirus funds to be sure the sector gets federal aid during the pandemic. (FERN’s Ag Insider)

Judge backs SNAP in Puerto Rico: A federal judge ruled it was unconstitutional discrimination to deny Puerto Ricans access to SNAP and two welfare programs; since 1981, Puerto Rico has been given a block grant for nutrition assistance. (Associated Press)

Trump signs recreation bill: The Great American Outdoors Act, signed into law by President Trump, will devote funding to a maintenance backlog at national parks and other public lands as well as provide money for land acquisition. (White House)

Roundup costs Bayer billions: German chemical and pharmaceutical giant Bayer reported a net loss of $11 billion in the second quarter of this year due to special items for litigation, including its proposal to settle lawsuits against its Roundup herbicide for $10.9 billion. (Wall Street Journal)