Why are organic grains lagging behind?

(AP) After years of dynamic growth, organic food accounts for more than 5 percent of U.S. grocery sales, with dairy and eggs ringing up $1 in every $7 of the estimated $49 billion in organic food sold annually. 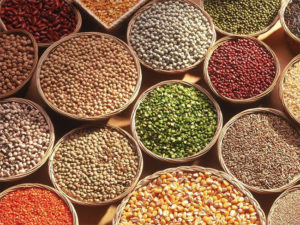 Yet, the amount of farmland devoted to organic grain, needed for feeding livestock, is expanding slowly, according to a trade group report, and totals far less than 1 million acres, nearly invisible among the 910 million acres of land in U.S. farms.

Organic grain sells at a premium to conventional grain, a powerful incentive in a lackluster farm economy, but there are many hurdles between growers and profits, said two industry officials. Some grain handlers and food companies are changing their operations to smooth the path.

Some of the barriers are obvious, such as the expense of the three-year conversion to organic from conventional farming and time needed to learn a new set of production skills.

Others are pervasive because organic farmers are niche marketers in a grain trading, shipping and processing world built for bulk commodities where one bushel of No. 2 corn is interchangeable with any other bushel.

Organic farmers need a separate sales channel for their grain and have to travel farther than the local grain elevator for a buyer.

Organic growers employ multi-year crop rotations to control weeds and maintain soil fertility. As a result, the crops that fetch the highest prices, such as corn or soybeans, are harvested once every few years.

“Those rotations have costs,” said Matthew Dillon of Clif Bar & Co, of Emeryville, Calif. “Some of those crops are not going to be profitable.” Clif Bar underwrites research into organic crops and has taken steps such as offering long-term contracts so growers have revenue to carry them through the transition period to organic and have an immediate buyer for their crops.

Andy Vollmar of The Andersons, a diversified company based in Ohio that has seven certified organic facilities, said the company now handles dozens of organic crops, so growers have an outlet for their rotations. It also sells nutrients designed for organic farms.

The Andersons is active in ethanol, rail, grain trading and plant nutrients. It has 50 grain terminals in 11 states and two Canadian provinces. Vollmar and Dillon spoke at USDA’s Outlook Forum last week.

The U.S. Organic Grain Collaboration identified three ways to encourage larger grain production in a report last week. They are mechanisms such as forward contracts that lock in a price for growers, development of markets for the lower-value crops in organic rotations, and increased availability of expert advice for growers.

“Organic grain crops are a financially viable choice for American farmers and the industry is mobilized to reduce the barriers and increase the number of organic grain producers while supporting sustainable growth and farm viability,” said Elizabeth Reaves of Sustainable Farm Lab and a co-author of the report.

Farmers grew 765,000 acres of organic corn, soybeans, wheat, oats and barley in 2016, with Montana, Iowa, Minnesota, Wisconsin and Wyoming as the top five states and nearly 40 percent of U.S. acreage, according to the report, “U.S. organic grain – How to keep it growing.” The predominant types of growers were small farms totally devoted to organic and mid- to large-scale farms that grow organic and conventional grain.

Because organic livestock production has grown more rapidly than grain output, imports of organic grain and soybeans zoomed to $401 million in 2016, ten times their value in 2011.